ALEX BRUMMER: Rate hikes boost savers, but should the Bank of England have gone further?

By Alex Brummer for the Daily Mail

Andrew Bailey’s critics say he hesitated for more than a year because he didn’t understand the threat of inflation and postponed raising the Bank of England’s key rate.

Even after yesterday’s 0.5 percentage point jump, which brought the total to 2.25 percent, many feel he should have gone further.

Yes, this was the seventh hike in a row and it brought interest rates to their highest levels since 2008. But the governor firmly resisted calls for an even sharper hike – fearing a tougher stance could risk Britain into a deeper recession.

The Bank’s own Monetary Policy Committee was far from unanimous on the hike: three of its members wanted a 0.75 percentage point hike, which would have been the largest rate hike in 33 years.

So why didn’t Bailey move on? It is likely that he was guided by the Bank’s own assessments, which show Britain is already headed for recession. Thanks in large part to Liz Truss’ energy price guarantee, which aims to curb rising gas prices for households and businesses, the projected peak inflation rate for this year has fallen from 13.3 percent to a still alarming 11 percent. Even that is still more than five times the Bank’s 2 percent target.

Sterling fell to just 1.12 against the dollar overnight after the Federal Reserve imposed its own 0.75 percentage point rate hike. After the pound regained some ground over the course of the morning, it immediately plummeted again when the bank’s announcement came at noon.

To make matters worse, the Bank runs the risk of further depreciating the pound against the dollar and other major currencies by raising key interest rates less than the markets wanted.

The pound has fallen 4.5 percent since August alone – and is now at its lowest level against the dollar since 1985. When Covid-19 hit in early 2020, Bailey cut key interest rates to the historic low of 0.1 per cent. Many believe he was far too slow to raise it again once the worst of the pandemic was over.

Other central bankers are prepared to take much more drastic measures. On Wednesday, the US Federal Reserve raised interest rates by 0.75 percentage points to a total of 3.5 percent, in an attempt to contain runaway inflation.

The Bank of England does not target any particular exchange rate. But a weak pound could exacerbate inflation, countering Truss’ push for energy prices.

Since taking office just weeks ago, the Liz Truss government has pledged to spend a huge amount – up to £150 billion by the highest estimates – to protect households from rising energy bills this winter, and around £40 billion more. is intended for companies.

This, along with Kwarteng’s expected tax cuts today – including a hefty hike in national insurance and the cancellation of a proposed corporate tax hike – has caused consternation in the markets. The Institute for Fiscal Studies think tank has even argued that the policy could make UK public finances ‘unsustainable’. 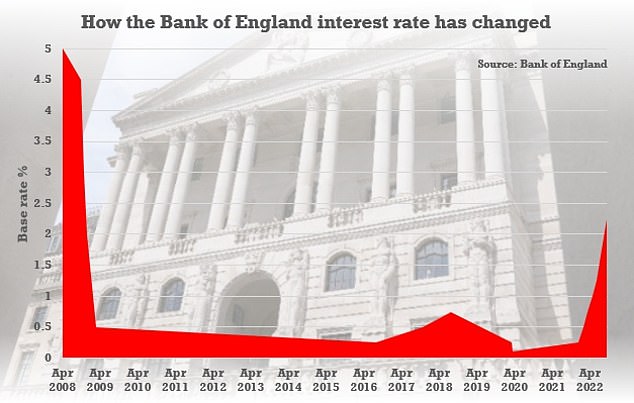 ALSO READ:  Meghan Markle's half-brother 'lodges bid to get their father Thomas under a conservatorship'

Today marks the seventh month in a row that the Bank has raised interest rates, although historically the level is still quite low

So what conclusions can we draw?

Another hike in the base rate should cheer savers, who are finally starting to see returns on their deposits. It must be said, however, that these increases will not be nearly enough to match the ravages of inflation, and many banks have been shamefully slow in passing on increases to their customers.

Meanwhile, homeowners — especially those with tracker mortgages and anyone taking out a new loan — will immediately feel the impact of the rise in mortgage rates. Even those with a fixed-rate mortgage will only be isolated for so long. This can affect house prices.

Overall, the government is in a stronger position than it probably was in March. Tax receipts were resilient. The pressure on public finances may be less than some analysts predict.

Nevertheless, this won’t be the last rate hike — and borrowers will face a long, harsh winter, no matter what their thermostat says.